Tim Boggan had been staying at my house for two weeks as I did the layouts and photo work on History of U.S. Table Tennis, Vol. 11, so we went down together on Thursday, March 17. He was doing the coverage while I was playing only in the hardbat event, coaching the rest of the way. The drive down was uneventful other than the usual extravagantly expensive Tim kept treating me to (as he had for two weeks). I could eat for a week on what he paid for one of our meals. I spent Thursday night in Tim's hotel room.

This was held on Friday, from 10AM to 4PM. I was the defending champion, so all the pressure was on me, right? Ah well, us champions have to get used to it. :) In my round robin, I had a tough match with Chris OBrian (no apostrophe in his name) and his big forehand smash, and he led much of each game, but I ran them both out near the end. (All hardbat matches were best of three to 21, using 38mm balls.) Jim McQueen was also a surprisingly tough match with his touch and backhand pick-hitting, but I adjusted and pulled away near the end of each game.

In the final four-person RR, I had to play Chris again. Down 6-11 in the first, I jokingly (or was it?) complained about the five edge balls and one net dribbler he'd already scored with! I'm not making that up. At one point he won three straight points on edges. Most of them were because he was playing everything to the wide corners, trying to get away from my forehand, so he was also missing balls off the side. He ended up winning that game, but I won the next two. The only thing worse than an opponent getting nets & edges is an opponent getting nets & edges who is also playing well! Chris has a nice forehand, and his angled backhands were also effective, even when they weren't clipping the edge.

The next match was Steve Hitchner. He attacked my serve and followed up his serve with aggressive backhands to wide angles, putting pressure on my forehand-oriented game. For 1.5 games, I still won somewhat easily. Then I just ran out of steam - he'd run me to death, a smart tactic. I had trouble running down his shots, and started chopping more, and next thing I know I'm practically dying. I led 20-18. He deuced it. I went up 21-20. Then he ran me around, I put a ball up - but he missed it, so I survived.

Before the final against Chu Bin Hai, I took a 15-minute break. Chu is an elderly pips-out penholder rated 2243 from Florida. He'd forgotten to bring shorts, and so was playing in jeans. (He'd get shorts for the next day.) Since he's used to pips, and since he'd steamrolled everyone he'd played so far with ease, the feeling was he was a big favorite - especially after he won the first, I think 21-15.

I was attacking every serve with my forehand, and following every serve with a forehand. I continued this, but started angling even wider into his backhand. He had a very efficient forehand and a steady backhand block, so I wanted to keep him blocking. I almost died running around hitting, and did throw in some chopping (usually ending the point by suddenly smashing one of his drives), and managed to win the match by scores of (I think) -15, 17, 15. 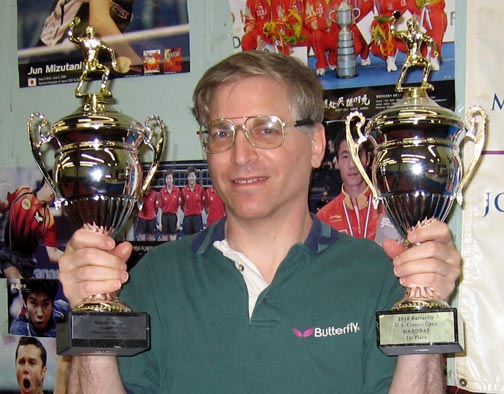 The Cary Cup's been good to me the last two years - two hardbat titles, two huge trophies, and $500, a nice supplement to my coaching work. The down side - I came out hobbling about on an aching right knee, right leg, upper back, and right shoulder.

That night I moved in with Tong Tong, his dad Chaoying, and Greg Mascialino, another top junior from Maryland.

My major task at the Cary Cup was to coach Tong Tong Gong, a player I've been working with for a year and a half or so. He's 13, rated 2256, and a member of the U.S. National Cadet team. Unfortunately, I can't really talk about the tactics - his opponents might be reading this! - but I can give the gist of it. I knew most of players, and was able to watch all of them play before Tong Tong faced them, so was able to come up with pretty good tactics. More importantly, Tong Tong knew how to follow the tactics, and was able to adjust as needed as the opponent adjusted.

He beat a 2144 player 3-0 to get into the "A" Division, where he was put in a group of nine players, so eight matches. First, his losses: to Gao YanJun (2609), Zheng Jiaqi (2527), Paulo Rocha (2474), and Raghu Nadmichettu (2368). Gao was simply too strong. He almost got a game off Zheng, but challenged that surprisingly good backhand loop of hers too much and lost 3-0. He got a game off often-practice partner Raghu. The interesting loss was to Paulo. Tong Tong went up 2-1 in games, and made it to 9-all in the fourth, 8-9 in the fifth before losing 11-8 in the fifth. It was a disappointing loss as he thought he had the shots to win in the fourth game, but couldn't pull them off. There were some spectacular rallies, and Tong Tong pulled off some backhand kills that brought back memories of Jim Butler. What made this even more interesting is that in his next match, Paulo upset Gao, and he would later be up 2-0 on top-seeded Peter Li (2646) in the quarterfinals before losing a close five-gamer.

Now to his wins. Tong Tong defeated Cory Eider (2341), John Wetzler (2299), Olivier Mader (2239), and Brenda Mun (2085, but after defeating Wetzler and Thor Truelson - rated 2274 - she'll probably be adjusted upwards. Tong Tong had upset Wetzler at the Teams in Baltimore, and showed that he still knows how to play him with his attacking forehand and long-pips backhand - though of course next time out Wetzler will be after him again. The two really interesting matches were against Mader and Eider. Mader is a pure long-pipped blocker with seemingly frictionless long pips. Normally he eats up junior players with their lack of experience, but Tong Tong is apparently wise beyond his years in the ways of long pips and won easily, I believe 7,4,7. Against Eider, he won the first, lost the next two badly, and was rather dispirited. I gave him a pep talk, got him to jump up and down a few times to get his feet going, and (helped by a few nets/edges in game four), won the next two games somewhat easily by the scores, though every point was a struggle.

So Tong Tong finished 4-4, in fifth place. The top four advanced, and so he missed it by one spot. He spent the rest of the day lamenting that match with Paulo, and on the way home we made up humorous revenge stories for the next they faced each other. One of them ended with the zombie of Tong Tong defeating the ghost of Paulo where they used a flaming ping-pong ball. Don't ask.

I wrote a paragraph here on what Tong Tong's improved on, but his rivals might be reading this. (Shhh!) Suffice to say he's returning serves better, his backhand is becoming lethal, and he has more power on the forehand. He still has trouble with [deleted] and [deleted], so any opponent that [deleted] will easily defeat him. :)

I had a bunch of heavy stuff in my playing bag, and couldn't find Tong Tong's dad. But when I went outside, I saw that the car window was partially down, and I could reach in and unlock the door to put the stuff inside so I didn't have to carry it around. Unfortunately, it set off the car alarm, which was VERY LOUD. As numerous people stared and complained, I raced about, trying to find Tong Tong's dad Chaoying, since he had the key. During my rushing about, I hurt my left knee, which gave me matching aching knees. Fortunately, Dick Evans (one of the umpires) came by, and somehow was able to turn it off with his key. I was ribbed for being a "car thief" by a number of players. My knee still hurts.

Here are the basic results, from memory - let me know if I got any of it wrong.

And then we played travel bingo and told Paulo revenge stories all the way home. (Actually, Paulo's a very nice guy and cool and reserved during matches, but Tong Tong REALLY wanted that match!)

Send us your own coaching news!