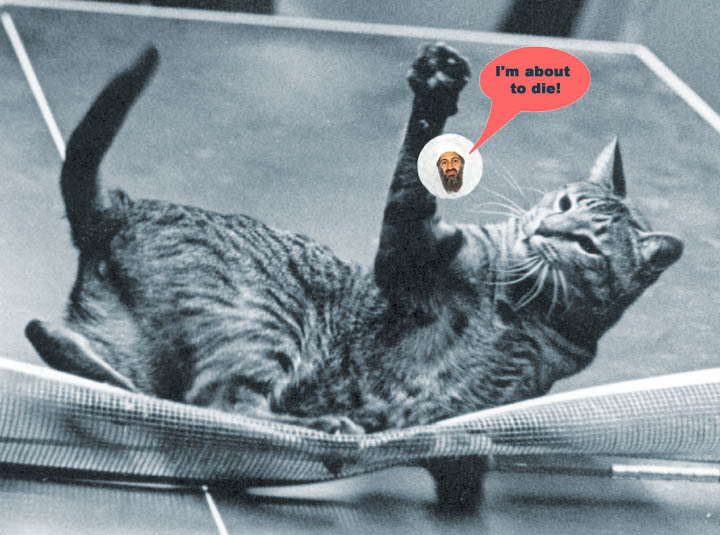 He was swatted away at the end of a ten-year cat & mouse game. (The original photo is by Mal Anderson - it's real! Then I got busy in Photoshop...) Send me your own table tennis pictures showing Osama's demise and (if they are in good taste) I'll feature them here.

Do something with the receive

I was watching one of our top cadets in practice matches this weekend. When I coach him, I'm always reminding him to "do something" when receiving. In other words, don't just push the ball back. If you do push it, do so aggressively, i.e. quick off the bounce, heavy, low, and angled. Or aim one way and go another. Or push short. Or flip. And if the serve is long, then you simply have to loop it, period. (Yes, there are exceptions, but they are exceptions. I'm talking higher-level here - but if you want to be good, you'll loop the long serve too. See my March 14 Tip on attacking deep serves.) The cadet, who knew better, was just pushing the serve back, relying on his reflexes and blocking ability to win points - while developing a bad habit. I spoke to him afterwards, and reminded him that practice matches are just that - practice matches, where you practice. Next time, hopefully, he'll use those practice matches to practice. How about you?

The ITTF is featuring the coaching seminar I ran at the Maryland Table Tennis Center (April 16-17, 23-24). I'll probably run another next year, maybe sooner. We'll see. If interested, contact me and I'll put you on my email list when I plan another one.

In an email to the USATT Board, staff, and committee chairs, USATT Coaching Chair Richard McAfee - the one responsible for bringing the ITTF coaching certification program to the U.S. - wrote:

"We now have Course Conductors in each region of the country and the Coaching Advisory Committee is working hard to get more regional courses held this year. These courses are completely self-funded and no USATT funds are being used to support the courses. Hats off to Larry, for demonstrating a model to deliver these courses in a way that makes it cost effective for the Course Conductors. The problem with starting any new program is getting someone to go "first."  I believe that once our Course Conductors give their first course and realize that it is not that difficult to do and also the importance of the contribution they are making to the sport, we will see regular regional courses being held."

My thanks goes to Richard, Glenn Tepper and ITTF, and especially to the 14 coaches who braved the horror of me speaking for (it seemed like) the entire 24 hours.

Want to be saturated with table tennis videos?

Reflex Sports, the table tennis video outlet, has figured out how to sell table tennis videos in an age where you can find videos of just about anything on youtube. They are selling access to essentially their entire table tennis video library - just about every major tournament since 1985 - as well as video coverage of the upcoming World Championships. It's only $59/year or $89 for two years. Here's where you go to buy access. One of my students bought me a subscription.

Send us your own coaching news!